I don’t know where to begin about this week. My thoughts are sort of scattered on how to organize them for this post. I had a very busy week at work to the point where I was only able to get one day of training in this week. It was also the 2nd anniversary of the death of one of my very best friends, my dad had surgery to remove a cancerous kidney, and I had a triathlon that I was racing in. A very emotionally full week to say the least.

Work- is well work. I took a promotion and now 2 people are doing the job of 4. It is what it is and will get better so I won’t go into the daily grind that we all know. Though it does suck that I haven’t been able to train because I’ve been putting in long hours. Maybe an excuse but I also feel sleep is important.

Saralynn (my friend who passed away)– I could write a whole post possibly a how book about her. She had an infectious smile and laugh. A lover of life, adventure, music, family and friends. Her story is a bit of a beautiful tragedy if there is such a thing. I will say there was nothing beautiful about the way she passed but she was beautiful and she had gone through more in life at the age of 33 then most people I know who lived to a ripe old age. An old soul to say the least.  I will come back to this in a bit.

My Dad- This is a story in itself and I will fill you in on the details in another post. I don’t want to take away from him or the other things I want to write in this post so stay tuned on this.

Lets get to what I was really intending for this post- MY OLYMPIC DISTANCE TRIATHLON- This triathlon was about an hour 15 away so I drove there the night before. Before bed I organized all of the my gear and mentally made notes of how I was going to set up everything in transition. I went to dinner, had a couple of glasses of wine and then went to bed. I slept like a rock but woke up very nervous. I got to the race and got set up in the transition and then I waited. I had almost an hour to wait before my start time. My nerves started to build. My feet were cramping and I hadn’t even started doing anything. I again questioned myself as to why in the fuck I do this to myself. I needed to calm myself some how and so I did the best thing I could think of….I spotted a cute little dog really close to me and asked the owners if I could love up on him to take my mind off things. It totally helped. I need to bring my dogs I think from now on with me. 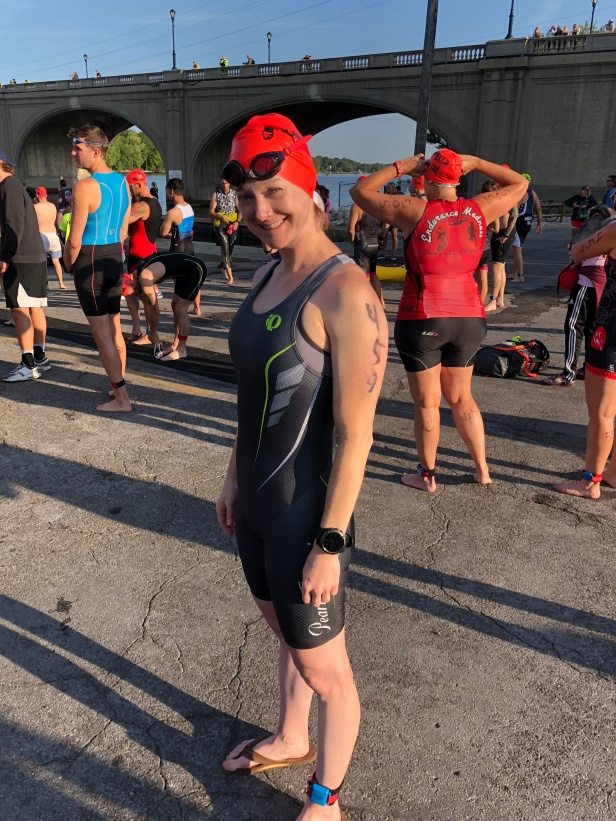 Once my wave wave was up I got into the water. I got in the very back of the pack and waited, I strategized how I was going to execute this swim. The buoys were to my left but the sun was on my right so I planned on breathing on my left side on the way down. At the turn around I would change my breathing to my right side but knew I would have to be more mindful of sighting the buoys to make sure I was on track. This might seem like no big deal but this little adjustment in breathing patterns can totally throw you off so I had to mentally prepare as I swam. This actually helped a lot. Even though my foot cramped during the swim I felt strong and I actually passed some people.

Transition to the bike was also good. The bike was flat and I got passed by a LOT of tri bikes (mine was still not up and running because of the seat so I was on my road bike). I was jealous of all of those bikes but I still felt strong. I passed a lot of people. A co-worker of mine who used to do triathlons told me to find something enjoyable to make it memorable. On the ride there was this girl who passed me and cheered me on telling me how I was doing a great job. It really set a tone and I so I started doing the same to those I passed. The 26 mile went by quickly, the weather the amazing, my attitude was good and I have Bob Marley stuck in my head. 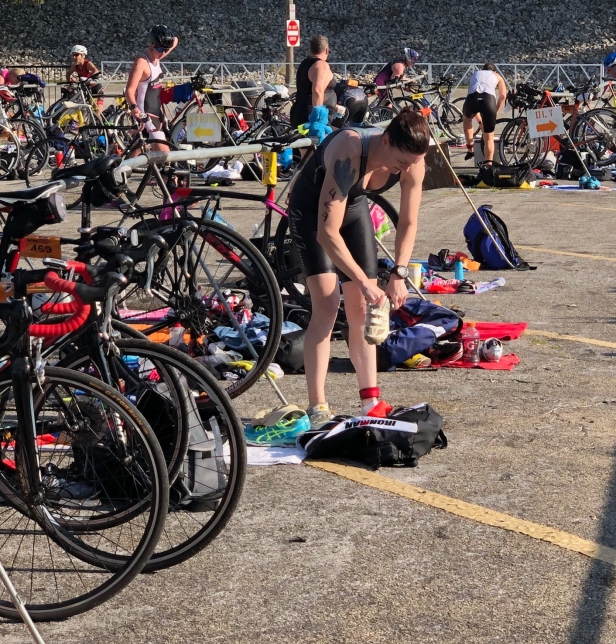 With that said, I’m going to bring this back to Saralynn. As I mentioned the week leading up to this race was the anniversary of her death. On Friday driving to my race a picture of me, her, Annie (her sister) and my friend Allison from 2005 popped in my memory news facebook feed so naturally I shared the memory. BTW it was probably one of the best weekends that I have had and I think the other girls would agree with me. I mentioned Bob Marley was stuck in my head on my ride, she loved reggae music so it was really interesting that I had it stuck in my head. When I asked if she was with me, I got goose bumps. So I don’t know if angels is the correct terminology for what I experienced but I do believe that my friend was with me on that race and she helped me through it.

I got back to the transition to do my run and my legs actually felt like working so on to the run I went. At the very beginning I ran next to a girl whom I had passed and she passed me on the bike. I asked her name which was Maddie and let her know that I wanted to run with her if she was interested. We ran together chatting the entire way (yes it was difficult but also good lung training). I told her my story and she told me hers. As I was telling her about my journey and why I was doing this Ironman when we ran up on this older gentleman. Everyone has their age on their calf and this guys said 69. He was my hero because he was almost 70 and doing an olympic tri. As I was saying this was my journey and my lessons to learn he chirped in and said that is what life was all about. Maddie (the girl I was running with) and I high-fived him and continued on. As we approached the the finish line we picked up the pace and finished strong. We hugged and wished each other luck  and parted ways.

Results are available after the race so I wanted to see how I did. When I went to check the scores hadn’t been posted in over 30 minutes and I wasn’t interested in waiting around so I left. I had the unofficial time on my watch. I would wait until the results are posted on the site.

I got home and did some things around the house when JD called and told me I left the party early. I ended up getting 3rd in my age group and 73rd over all. Basically I kicked some ass! I needed a win and this was the win I needed. I can contribute this to a lot of things and I will stand by the fact that my friend that day was helping me through something that I needed to get through. So thank you dear friend. I love and miss you immensely?? ❤