JD and I went through our first weekend on the new training program which means, we got up and worked out first thing in the morning (something that NEVER happens) and we didn’t have any alcohol. I will say, being sober brings a whole new aspect to Sunday Funday. Weekends are definitely the hardest since we did spend a lot of our afternoon evenings enjoying the back porch with beverage in hand. This to shall pass right?! 😏

With JD on board with the diet and working out, I needed to modify what I was eating a bit so that we both can eat the same foods (different portions) so we weren’t making 8 different meals a day! Since my coach only gave me one day of meal prep for each week, I had to get creative and I will say I think I did a damn good job! She said its ok to be a little over in carbs (I am in my high carb week) and anything 5-10 over in fiber is ok as long as I hit my protein goals. Welp, Monday was the first day that I’ve come this close to hitting all my goals! We literally spent hours over the weekend planning out our week. This macro shiz is no joke!

Remember in my prologue how I’m the master at complicating our lives? Well just let me tell you that JD is almost as good at it. We decided to get a few more chickens after we had lost so many however, we wanted adolescent birds. Yeah, they didn’t have any so we ended up with 4 baby chicks per JD’s suggestion. They are currently in my basement under a heat lamp. They sure are cute and with the number of eggs a day we both have to eat, we need like 20 more. LOL We won’t name them until they are older when we understand their personalities. 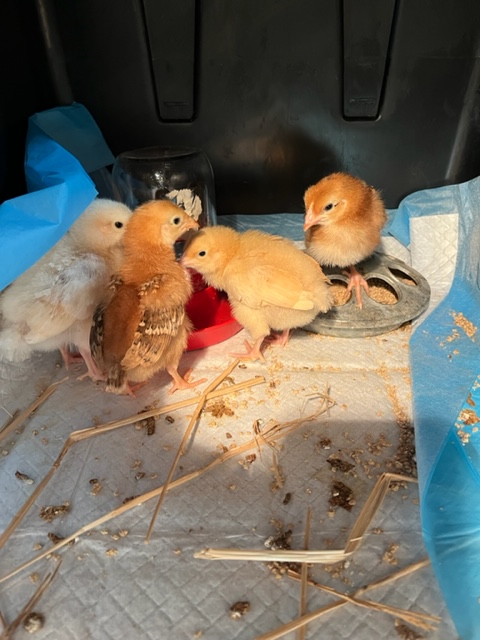 Since we are technically in our second week, I moved from high carb/low fat to high fat/low carb mid week. The transition has been a little tough just from a standpoint that I was finally understanding the combination of food I need to consume and then it all changed. I do prefer a high fat diet more as it seems to align with what I was eating previously. Open faced egg sandwich with Canadian bacon, butter and fruit. Chicken sandwiches (with gluten free bread but hey, it’s a sandwich), etc. More oil and butter which means more TASTE! I’m not a huge fan of rice which is what I feel I was only eating on the high carb diet. It was so plain.

Things that we did purchase to help make the food not so boring. Keeping in mind the amount of sodium I’m allowed to consume a day, we needed no to low sodium options.

Braggs Aminos is a great substitute for soy sauce. It has a third of the sodium and still tastes like soy sauce so it’s a great addition a lot of foods including meat. 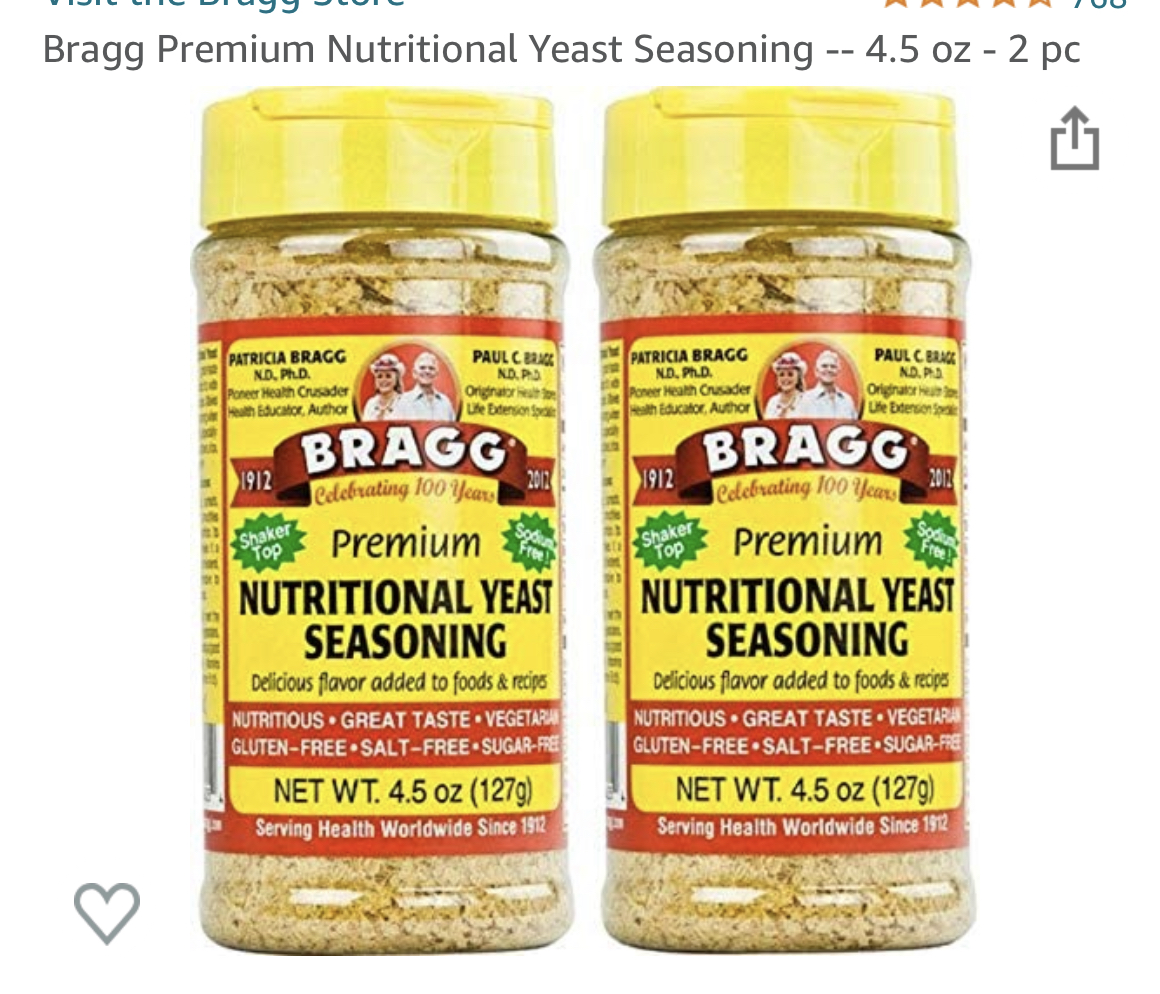 Braggs Nutritional Yeast has some protein, carbs, and a fat though the best thing about this seasoning is that it has a cheese like flavor so it makes a good addition to foods when you are on a dairy free diet. 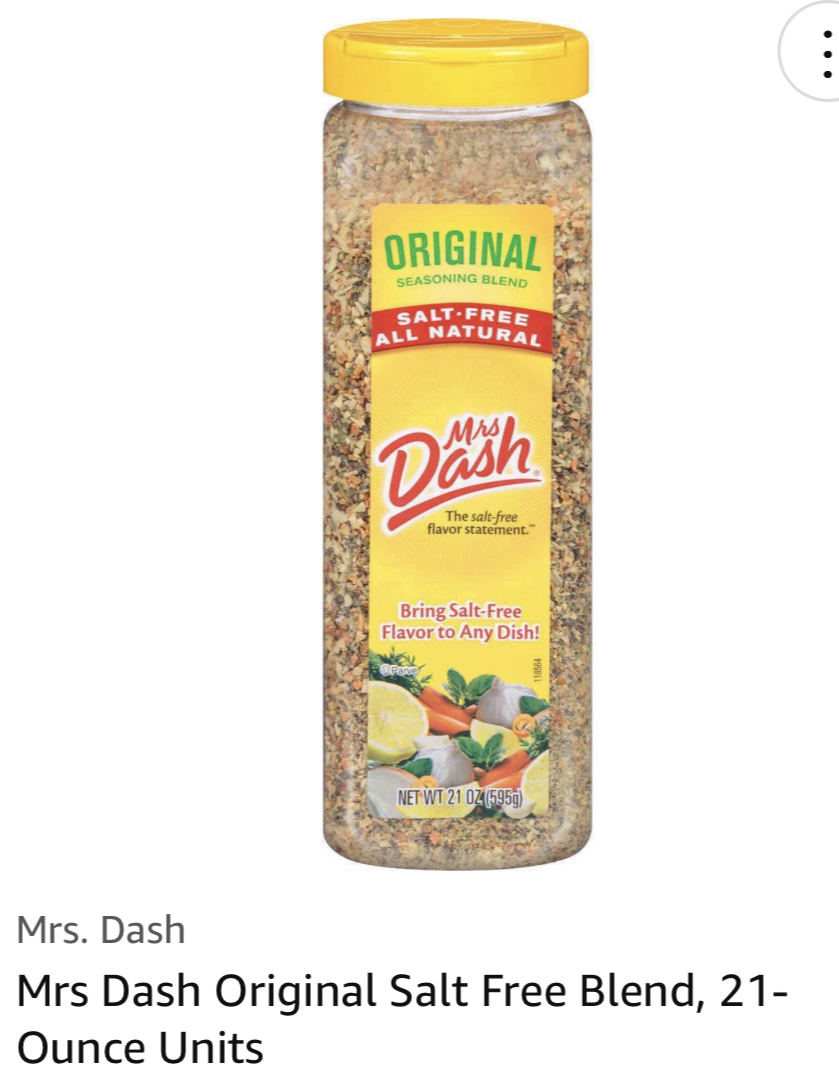 Mrs. Dash’s salt free seasoning has a bunch of different dried veggies and herbs. You can use it basically on any dish (meat, veggie and even carb type foods) to add a little bit of flavor.

Though the seasoning I was most excited about getting was the No Salt. Now for you salt lovers out there, this is NOT salt nor does it have the exact flavor of salt. It does, however, give a hint of salt flavor which has been awesome as I have missed salt in my diet. I don’t eat a lot of salt normally though when you are told you can’t have it, you want it more.

This week has been a bit more of a struggle for me from a drinking perspective. Wednesday I went into the office and per our handbook (yes this is a legit rule), we can go down to the bar and have a drink starting at 3:30 (and yes my company has a beer and wine bar in our office). During our team meetings, we usually have a drink in hand and talk about all the things compensation. Well that wasn’t the case for me and it was a major trigger though I persevered. The next biggest trigger was Friday. It was a beautiful afternoon, perfect patio drinking weather. That was an internal battle I had with myself. JD even tried to tempt me by saying, lets just have a bourbon. Now that shit was super tempting however, I didn’t have the calories for it and I wasn’t about to forgo food. The other thing, I’ve had a couple of dreams where I drank in them and I woke up feeling SUPER guilty so I knew it wouldn’t be worth it.

Now to the stats. As mentioned in last weeks post, I have been pretty consistent from a weight perspective, ranging from 132.4-133.4 on the high carb/low fat. My first weigh in after starting high fat/low carb, my weight went down to 131.6. I did measure myself this week so I can could have a base line. Now, I didn’t previously measure all the things I did this time so I won’t have a comparison for all the things though I wanted to provide a data point nonetheless.

Though my hip measurement has gone up, that is my butt so I can only be excited about that. With that said, my measurements could have been a bit off also.

I’ve submitted my lifting videos to my coach and my first check-in is next week. I will be anxious to see what she has to say about progress and what my diet will actually be going forward. These two weeks were more so to get a baseline of what works/doesn’t work for me.

Aliments I’m contending with: I am scheduled to do cardio 3x per week. Well I decided to jump rope since even though it is a 30 minute clock, it is only 15 minutes of work (30 seconds work/ 30 seconds rest for 30 minutes). BAD idea. I really fucked up my left heal and ankle and am having to baby it a bit. Luckily my lifting doesn’t require heavy use of my feet so I’m hoping it is much better before I have to use it a lot. The other thing, I found out that I have a bunch of planters warts on my right foot around the base of my toes. I had these frozen on my doctors visit on Thursday and they hurt like a mother effer! However, they hurt before they were frozen so I would rather they be gone. Needless to say, I’m hobbling like crazy on both feet for now anyway.

We have our first guest entertainment this weekend so stay tuned on how that goes and what my feed back is from my coach next week!

Thanks for reading and joining me along this journey!

One thought on “Crazy Train- Week 3”